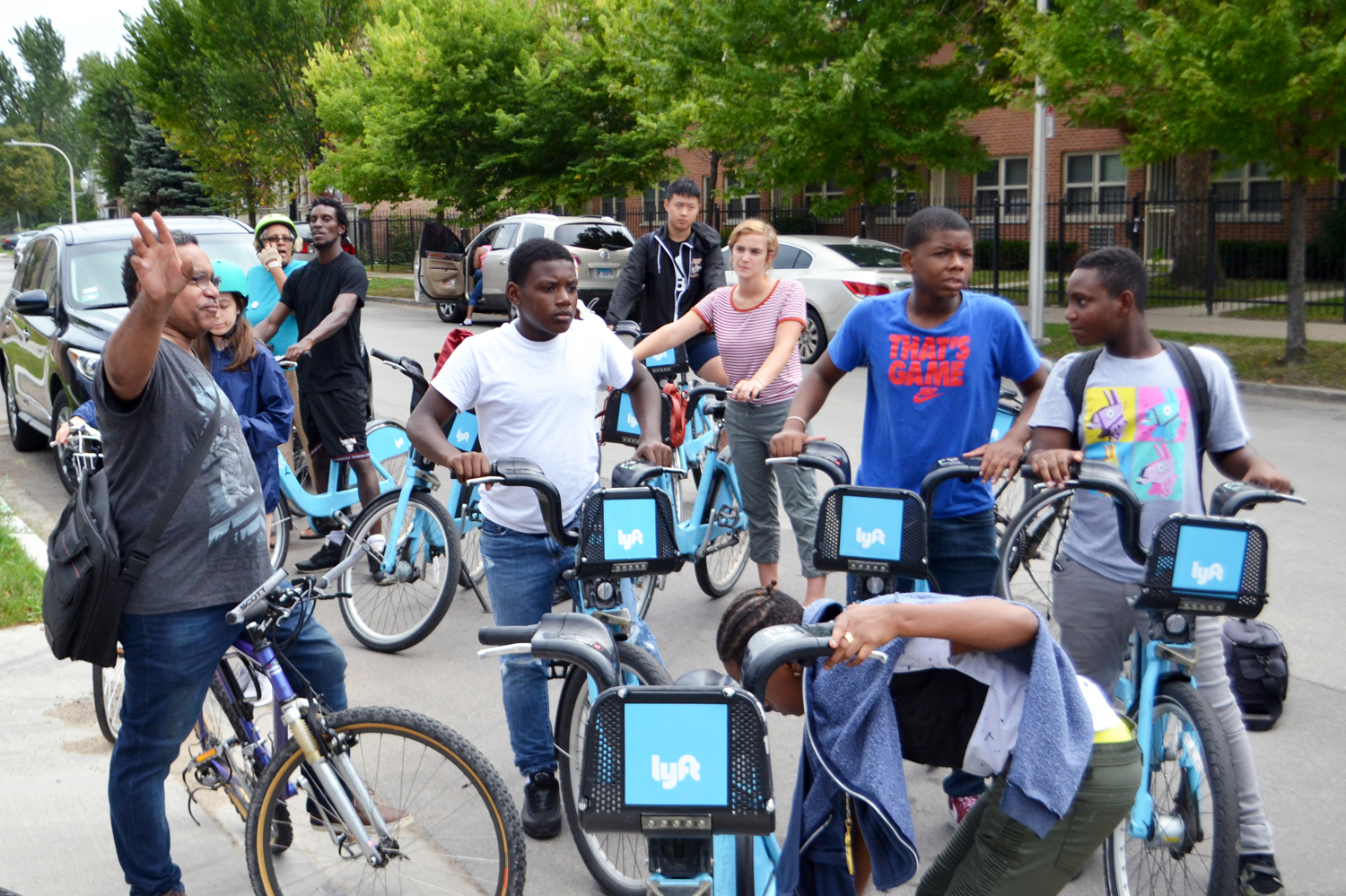 “Bronzeville is an extraordinary community filled with precious cultural artifacts and historic locations where many of our community’s best and brightest have walked, talked, laughed, and cried,” read the program guide created by Bronzeville Alliance for the second event in this year’s Nourish (comm)Unity series. On the afternoon of September 21st, participants on the FRESH Bronzeville environmental tour not only walked, talked, and laughed: they also biked.

As with the first event in the series, organizers in Chicago Sustainability Leaders Network partnered with Divvy Bikes to provide free rides. The bike share service brought a van full of bikes to the meeting point. As participants collected their bikes, Institute of Cultural Affairs Program Manager Samantha Sainsbury introduced the ride by asking each person to name something about their community that nourishes them. The answers— which included “unity,” “friends,” “culture,” “historical legacy,” and “getting to know people”—spoke to that richness of community described by Bronzeville Alliance.

Other answers—“youth,” “trees,” and “acting”—were directly connected to the Burke Elementary School Community Garden from which the ride started. Four Burke students explained that last year they worked with Bronzeville Alliance on the Burke Sustainability Project. To cap off the project, they created a series of four videos sharing what they’d learned about sustainability. In one video, two students decide to cut down the trees in the garden after they learn about the history of lynching in America. Other students intervene and explain the many ways in which trees benefit people and the environment.

Amandilo Cuzan of Bronzeville Alliance led the riders north to the Piece of Peace Garden, a project of the Bronzeville Abundance Campaign, which is working to create a block club along Calumet Ave between 51st and 54th Streets. The garden was designated in 2016 with support from 3rd Ward Alderman Pat Dowell, who greeted the tour alongside activist Dr. Sokoni Karanja and resident Santressa Harris. Each shared their perspectives on how the garden representing local placemaking and the involvement of multiple stakeholders from within Bronzeville. As Amandilo summarized, “the key to all this is residents.”

The next stop, Walter H. Dyett High School Youth Farm, is the largest youth garden in Chicago. Each year, up to 25 youth work work four hours in fall and spring and 20 hours in summer tending to the produce grown there. Bronzeville Alliance is working to create a pipeline whereby the youth who work at the Burke community garden can continue their environmental education at Dyett.

Sacred Keepers Youth (SKY) Youth Garden, is another place for Bronzeville youth to deepen their knowledge about and connection to nature. Toni Anderson, founder of Sacred Keepers Sustainability Lab, explained how the SKY Garden is an homage to the monarch butterfly and other pollinators. The garden is the site of Sacred Keepers’ youth monarch ecology course, which explores the symbolic resonance between the migration of the butterflies and the historic migration of black and brown folks. It is also shaped like a butterfly, which is easy to see for residents of the Luther Terrance Apartments just across the street. Toni explained that SKY Garden is both a “natural and social structure”, a place that encourages residents to be at peace. “Beauty is an antidote to violence,” she said.

After a long ride up Martin Luther King Drive from 48th to 38th Street, the tour stopped at Mariano’s grocery store. While a large commercial grocer may seem out of place for a ride focused on community gardens, this stop examined how Bronzeville history had shaped this particular Mariano’s. Urban planner Chris Devins, who was on the tour, launched the Bronzeville Legends Initiative in 2013 to “to transform the community with public art installations that highlight its identity.” In 2016, the project installed 32 photo murals of notable Bronzeville residents on the store and on the fence around its parking lot. Chris emphasized to the group, particularly the youth, the importance of celebrating heritage through public art. In addition to the murals, the Bronzeville Mariano’s features a large mural by Chicago artist Hebru Brantley.

From there, the tour headed west and south, stopping briefly at Wells Prep Learning Garden, which was established by teacher Lois Williams-Tandy to integrate gardening in the elementary school’s science curriculum.

Nestled near the I-90 expressway is Legends Farm, a “two-plus-acre site that serves as an incubator for small farm businesses” and the largest site of Chicago Botanic Garden’s Windy City Harvest program. Legends Farm was established on the former site of the Robert Taylor housing complex in 2013 through support of the USDA National Institute of Food and Agriculture and Brinshore-Michaels. Today, it features eight incubator plots, numerous raised beds, two hoop houses, production training farm, a large washing and packing station, and community allotment gardens. In addition to Legends, Windy City Harvest coordinates 20 community allotment plots at City Gardens in East Garfield Park and 25 at West Haven Park on the Near West Side, as well as smaller projects like the youth farm at Dyett High School.

After departing from Legends, the tour stopped at Hadiya Pendleton Park, named in memory of a 16 year old King College Prep High School student who was killed by gang violence. Just weeks earlier, Hadiya had performed as a drum majorette in President Barack Obama’s second inauguration. In his 2013 State of the Union address, Obama spoke about Pendleton while calling for gun control. Amandilo asked the group to pause for a moment of silence in her honor.

Finally, the tour concluded at Bronzeville Neighborhood Farm, which has anchored Bronzeville Alliance programming for the past ten years. Bronzeville Alliance Lead Organizer Johnnie Owens and Master Gardener David Welch greeted the riders in the Farm’s gathering space. David led a brief tour of the beautifully-maintained garden, pointing out that the abundance of collard greens, kale, sweet potatoes, hot peppers, and other crops were chosen in honor of the African diaspora and American slave legacy. The rows upon rows of carefully curated and lovingly cultivated plants, with roots anchored in the Earth and array of colorful leaves and fruits reaching toward the sky, felt like the perfect image on which to close the tour.

Processing...
Thank you! Your subscription has been confirmed. You'll hear from us soon.